A Look into Ancient Roman Roads

This Summer, I studied abroad in Rome, as part of the Engineering Rome program. Our final project was to explore an engineering topic that relates in Rome in some way. I bounced around a couple topics, from arches, to accessibility in the city, and transportation, until I finally settled on a topic because I wanted to visit Via Appia Antica…roads!

In this following article, we will be exploring Roman Roads’

The Purpose of Roman Roads

“All roads lead to Rome,” you’ve probably heard that saying before. But on the contrary, it is not that all roads lead to Rome, but that roman roads lead everywhere. Rome was the center of the Roman Empire and the road network was constructed and maintained to connect the provinces to the capital. There were many reasons the Romans invested so much in their road networks, such as the movement of troops, supplies, and trade–all to expand their empire. As they conquered and gained full control over their new territories, the Roman administration began building roads, to connect their empire (Aquis, 2020).

Design of the Roads

When constructing these roads, the Romans had two major conditions (Martinez, 2020):

It wasn’t just that straight roads were easier to build–in fact, there are major difficulties with building a straight path– but the Romans felt these were outweighed by the benefits.

The first benefit to building a straight path is that a straight path is the shortest distance between two points. For the Romans, their military was imperative to their power and success. What this means is that when the Roman armies need to mobilize, they can do so very quickly, and get to where they need very quickly–due to the straight road. For example, if the army faced a big hill, instead of marching around or on it to get over it, the road would just be a direct, mostly flat path to go through. This decision to make a straight and minimal incline path therefore affords the Roman army the crucial advantage of mobilizing quickly, an edge over the competition.

The second benefit of building a straight and minimally inclined road is efficient trading (Aquis, 2020). For merchants and anyone else selling goods, they often transported their merchandise by vehicles, which were often drawn by animals. In short, what this means is that steep slopes would not allow for ease of movement on the road. For the roman engineers, they set the max slope at 8%, and this would only be used in the very rare cases or in short sections. Optimal roads meant shorter journeys for merchants, which in turn helped boost the overall economy as the road networks built by the Romans grew and grew. Citizens and merchants were taxed by the government, and then the taxes would be re-invested into building and maintaining the roads (Martinez, 2020).

These benefits are very important, but there was a major disadvantage in choosing not to redirect the road around obstacles: the landscape! Some of these landscape obstacles include (Cosentino, 2017):

Roman engineers faced these challenges by developing tunnels and bridges. Tunnels through the hills and mountains, and bridges to get over the marshy grounds and rivers. At that time, Roman bridges were some of the first and most sizable bridges ever built–some have even stood to the present day. Thus, despite this challenge, the Romans showed off not only their road, but also bridge engineering skills.

The purpose of pavement is to perform two main functions

For the composition of the pavement itself, roman pavements were formed through layers of materials that comprised of different mechanical and physical properties, each of which is serves a purpose and helped with various types of stresses that were subjected to different traffic loads. Let’s break down the figure above, starting from the bottom up.

Although the road was built straight, it was not built flat. A design aspect of the road was that it had an arc, with a dual slope. What this looked like was that the highest point was at the center, and from there, the pavement slopes downwards to the sides. The purpose of this was to help with drainage off of the road, adding resistance to floods and environmental hazards. (Cosentino, 2017)

Generally, the labor of constructing the roads was carried out by the army. And actually, there were many engineers in the ancient roman army, and their knowledge of roads, bridges, aqueducts, and fort construction were vital in the construction of the road. (Cosentino, 2017) The army and engineers collaborated with the curator viarum, “manager.” The curator viarum was responsible for the execution of the work to build the road, and its repair and conservation afterwards (Aquis, 2020).

Although it may sound simple, building a straight, flat, and durable road is no easy task, especially over long distances. To accomplish such amazing feats, roman engineers made use of a couple tools, let’s talk about three of them. 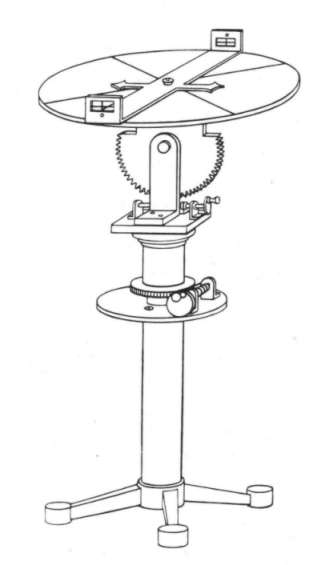 A dioptra, a tool used to measure angles and distances

The dioptra is similar to today’s tachymeter or theodolite. By using trigonometric relationships, this tool was used to measure the vertical and horizontal angles and distances between indicated vertices. The dioptra was used over long distances. 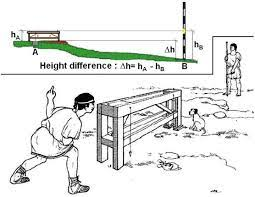 A chorobates, tool used to check the leveling of the ground.

This tool was used to level the ground. The leveling tool used today in fact evolved from this contraption. The chorobates was often used for ‘local’ levels, for short distances. 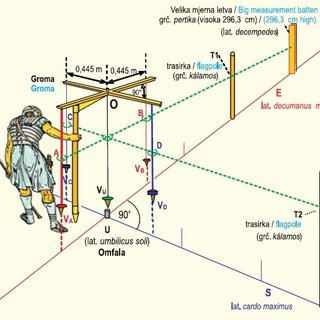 Groma, a tool used to ensure alignment over long distances.

The groma consists of a vertical pole, seen with mounted crossbars on a bracket that turns. In contrast to the chorobates, the groma is useful for confirming alignment over long distances.

The roman road network was quite vast, this meant that methods in construction could vary a lot, depending on the geological conditions (marshes, bedrock), terrain, geographical location, and availability of materials. Still, we’ll do a general overview of the process:

In total, Rome’s road network was estimated to be over 400,000km, and 80,500 of those were stone paved (Andrews, 2014). Along the main straight roads, smaller paths and roads branched out. This connected the roman provinces to Rome. Although still up for discussion, it has been theorized that that each of these branching roads were built on individual decisions, that there was no conscious decision to create a network of roads. Though, once particular towns were connected to the network, it helped further its development (Aquis, 2020). The road network was something that ultimately unified places that were at a distance and helped lessen the burden of obstacles of traveling such as mountains for civilians (Carlà-Uhink, 2021).

It wasn’t just the military and the merchants who were using the road, normal everyday civilians were allowed to too. To my personal surprise, there are various considerations taken into place along the road. 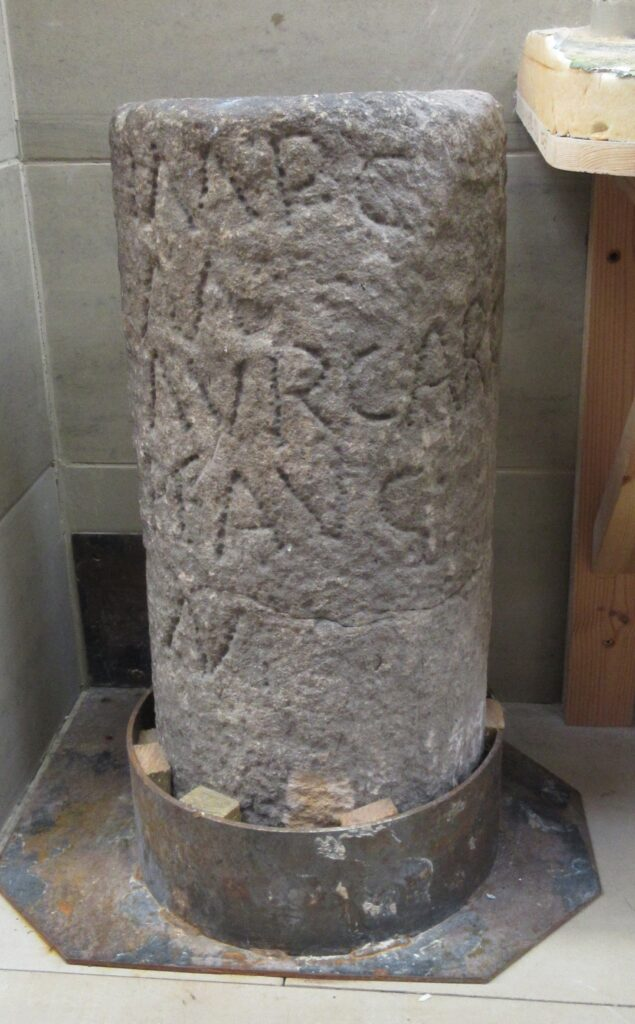 A “milestone,” used along Roman Roads

Along the road, there would be stone columns. These stone columns would report the distances in miles, which helped travelers gauge where they are, and how much left they need to go. Funny enough, this is where the term “milestone” comes from!

Every 7-12 miles, there would be various accommodations along the road. Some of these accommodations include guards, postal services and mutationes, which were buildings for horses to rest and to be switched or changed (Cosentino, 2017).

Lastly, around every full day of travel, there were small towns called mansiones. Mansiones were towns with accommodations that included refreshments, places for travelers to rest, stables for horses, blacksmiths, temples, and doctors–this is similar to the U.S. truck stops, though without the stables, temples, and blacksmiths.

By the government, the road networks were also a way to show Roman power, through the way that landscapes would be physically reshaped after control by the empire was established (Carlà-Uhink, 2021). Through and through, the network emphasized Rome as the center of its system, asserting its cultural and political dominance as it expanded across Europe, until…all roads lead to Rome.

Aquis. (2020, May 15). Construction of a Roman Road. AquisQuerquennis 3D. Retrieved September 29, 2022, from http://www.aquisquerquennis.es/en/how-were-roman-roads-built/