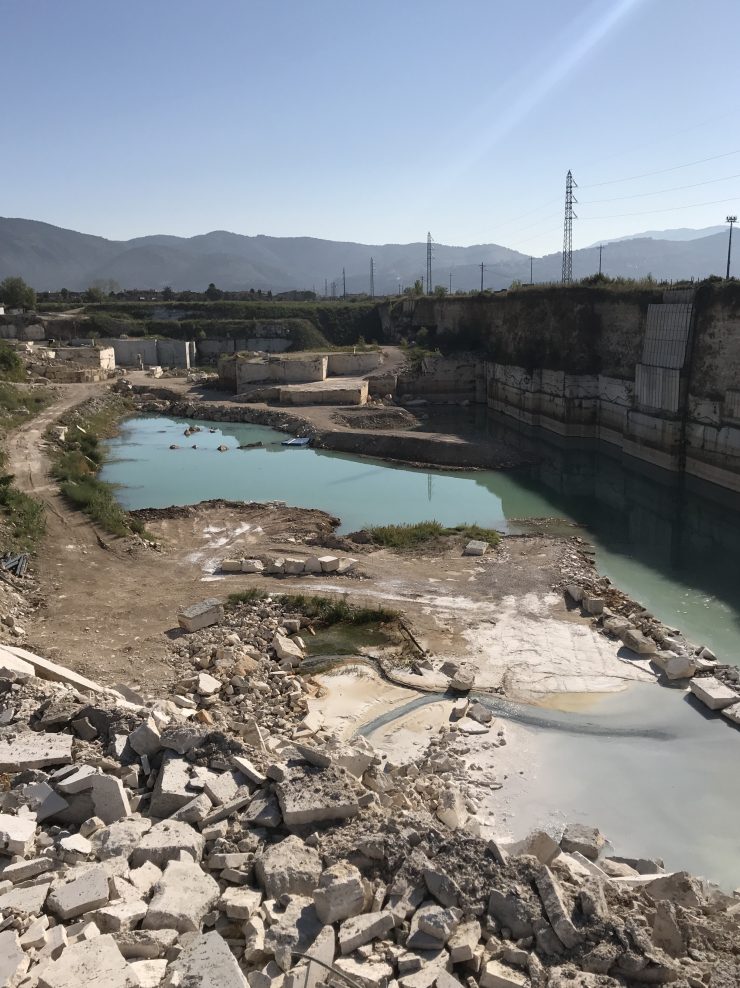 Travertine Production Process and its Use in Ancient and Modern Rome

Roman travertine is a defining characteristic of Roman architecture since the Roman Empire. The local stone has been used as a construction material for buildings. They were in high demand because of how close the travertine mine was to the city, allowing easy access to travertine pavers. For example, the Colosseum was built almost entirely out of travertine due to the close proximity of the material.  This long-standing stone can be also seen while you are simply roaming through the streets of Rome and in most major surviving monuments including the Theatre of Marcellus and St. Peter’s Basilica.

It is a white, sedimentary limestone that is essentially made of calcite which is deposited by calcareous waters. In other words, it is formed when hot springs water seep through carbonate minerals such that it produces a white and slightly yellow color. Travertine is a porous stone that is halfway between limestone and marble because if it is compressed such that when there is enough pressure over time, it can turn into travertine. If the stone is compressed for a thousand more years, it can turn into marble. Its versatility, resistance, color and long-standing elements are what make Roman travertine unique, both for interior and exterior design during the Roman Empire and the present day.

Origins of Travertine in Rome

The use of Travertine has been preserved over centuries in large deposits near Tivoli, Italy. The Romans would call this sedimentary limestone lapis Tiburtinus which translates to “Tibur stone” in Tivoli but had evolved into the word travertine. Roman architects found this material to be useful because it is not rare nor expensive as marble. “…architects liked to be able to make a building look important without too much work or expense” (Carr, “What is travertine?”).  In fact, travertine was often used on main parts of buildings as facades where it was too expensive to use marble. The properties and characteristics of this stone was first recorded in detail by Marcus Vitrius Pollio in which he lived from the year 75 BC to after 15 BC, during the rule of Julius Caesar. It was the Temple of Concord in which travertine was the earliest datable use in 121 BC. The supplier of travertine comes from volcanic activity which heats the springs around Tivoli.

Formation and Deposition of Travertine in Rome

Generally, the development of travertine involves rapid precipitation of calcium carbonate. The geological formation can either start over calcium-rich hot springs or a limestone cave which is then filtered through porous limestone rocks. That water essentially dissolves the limestone rocks such that it becomes saturated. Over time, calcium-rich water may be influenced by many factors such as the change in water flow rate, the temperature of the water, and drops in pressure, which causes the water to release gaseous carbon dioxide (also known as calcium carbonate). Then, as that calcium carbonate recrystallizes, colonial organisms such as bacteria, algae, and mosses often preserve the exterior surface of travertine by covering it and providing it with its porous texture (“What is Travertine?”).

Travertine at its purest form is white and made up of 99% of calcite and gypsum while the other 1% of the stone carries “traces of yellow sulfur, brown iron compounds, and organic pigments” (“Bagni di Tivoli Travertine) which gives Roman travertine a brownish yellow exterior. It can form in various colors due to small amounts of iron or sulfur in the stone. When the process of travertine has formed, it is extracted in large, deep pits known as a quarry followed by a difficult transportation as single stones were known to have weighed as much as twenty-five tons.

The areas of Guidonia Montecelio and Tivoli, which lies east of Rome, remains to be one of the world’s largest suppliers of travertine to this day. A stone much in demand came from quarries where “…it has been estimated that the Romans quarried some 5.5 million cubic meters of that stone over the four centuries of its major use” (Dyson, 312). Over the course of 2500 years, travertine producers have accumulated knowledgeable and innovative ways to produce the quality of this stone, progressively aware of environmental and work safety concerns. Travertine quarries make it available for us to choose different types, subject to color and texture variations.

Today, several travertine quarries can be located near Rome, including the one that I was able to witness firsthand. Pacifici, a family-owned travertine quarry, have been running their company for 70 years, extracting and quarrying 50.000 m3 of travertine per year followed by extensive processing.During the visit, I learned that the extraction or the slow cutting of the stone from its quarry is known as bancata. This primary phase uses a diamond wire before it is hammered out. From there, the color and structures are carefully selected before further processing. These blocks then undergo careful stone-work using precise modern machinery and are then cut into slabs of varying thicknesses using a diamond wire, which the slabs now have cleaner dimensions. The slabs are cleaned out from the dust and soil by using powerful water jets, followed by refinishing – the final phase.

Long before concrete made its appearance on the building scene in Rome and because travertine was cheap and available in Ancient Rome, it was highly utilized in the late 2nd century B.C for its qualities, appearance, and cost and became an acceptable substitution for marble.

The revival of travertine was brought to the Renaissance era – a period in which artists and architects reminisced the Classical era of Ancient Rome, emulating all things Greco-Roman. For example, the Guidonia Montecelio travertine quarry was specified to produce the stone by artist, Gian Lorenzo Banini, to build the circular Colonnade St. Peter’s Square. Many of these famous monuments have been preserved and restored to this day.

The Colonnades surround St. Peter’s Square as large travertine pillar walls. Just like the Trevi Fountain, thin slabs of travertine were mostly used on the cupola (a small dome on top of a larger dome) of the basilica. Before the design and construction of the basilica, Pope Julius II wanted to limit the spending on the building in the interest of economy.  With that said, along with the use of bricks, breccia, and tufa, travertine was commonly used on the façade which was built in the 17th century.

Limestone deposits, also known as travertine, were formed from flowing water of the aqueduct. This natural occurring phenomenon traveled from Aniene River of the Apennine Mountains to Rome for hundreds of years, becoming a major supplier for the city. The existence of travertine helped researchers determine how much water the aqueduct supplied, comparing records dating back from 97 AD to the present. The buildup of travertine inside the channel indicated average water channel known as wetted perimeter (Benjamin, 2015).

As the largest Flavian amphitheater in Rome, the Colosseum was quarried from Tivoli which travertine was used on the main pillars, the ground floor, and the external walls nearly rising 160 ft. high. Slabs of travertine were paved surrounding the Colosseum to support the outer realm of the building. “The main part of the structure is constituted by three ring walls with columns made of travertine blocks without mortar and connected by means of arches and architrave at various levels which support the ambulatory vaults” (Como, 666). The structure was completed in 80 AD by Emperor Vespasian to honor the grandiosity of the Roman Empire.  This amphitheater is entirely made of travertine.

The façade and reef of the fountain were constructed using travertine while the statues are made of carrara marble –  another popular stone used in many historical Roman structures. You can see that this material has an appearance of a fibrous or concretic material – slightly tan, white, or cream-colored.

The use of travertine has evolved in the building scene since the Classical era. It has “interpreted many architectural styles, from Barocco to Rationalism to Minimalist” (Pacifici). Today,  travertine is one of the most frequently used stones in modern architecture for interior design because of their latest techniques to produce thin slabs for facades, wall cladding, and flooring. As previously stated about the process of quarrying travertine, the local stone is later sold in slabs to consumers all over the world. Since travertine comes in various colors and textures, consumers have a variety to choose from. This is due to the inheritance of bedding planes, which can give a dramatically different look depending on the cut type chosen and chemical mixture for the pigment. The Pacific quarry, for example, sells several types of travertine. Here are some examples of the different variations in color, texture, and pattern of travertine:

Museum of the Ara Pacis

This ancient monument in Rome houses the altar of the first Roman emperor, Augustus. It was designed by American architect Rchiard Meier who incorporated a fine, beige Roman travertine on the exterior walls of the building. The structure alludes the architectural blend between modern and old elements from imperial Rome. It was inaugurated in 9 B.C. but was not open to the public until 2006.

The auditorium merges both modern and traditional materials dedicated to music, designed by world famous architect, Renzo Piano. He decided to use travertine marble for the flooring and Roman brickwork on the outside while the interior consists of a more modern look using dark wood.

In general, Roman travertine have proved to be a versatile stone used all throughout Rome because Romans believed that it was inexpensive and a great substitution for marble. As a result of the natural phenomenon being in close proximity to the city, quarries made it easy for Romans to access travertine as it helped redecorate the city overtime. Its varying appearance and high qualities can be seen in many ancient structures today. Each era, when travertine gets re-introduced to the building scene, Romans utilized the material in different ways, based on the time period. For example, many facades on Roman structures were inspired by stories of Roman gods like the Trevi Fountain. Today, as quarries continue to produce the stone, people have repurposed it through modern technology and style, blending both traditional and modern elements in structures.

Methods of Temperature Control: A Comparative Study between Ancient and Modern Rome – Draft 

Battling Consolidation & Flooding in Rome Through the Ages