Regardless of which era is observed, Rome is a rather hot city. Specifically from the end of June to the beginning of September, temperatures have always proven to be uncomfortably hot. Based on weather reports collected during 1985-2015, Rome’s average temperature during its hottest month, August, has a high of 89 °F but often reaches high temperatures greater than 90 °F (time and date). Though speaking from personal experience, most often the temperature feels much hotter due to the high humidity which averages around 60% for the day but can range anywhere from 20% during the nights of August to 100% during the worst days. When I was in Rome, from the end of August through most of September, I had multiple instances where I experienced the cooling effects of the methods that will be discussed in this article. For example, in Rione Sant’Angelo, where the “Jewish Ghetto” was established in 1555, certain alleyways, that are pretty short in length, narrow, and have sharp corners, are very well shaded and reside right outside of the very busy and hot Campo de’Fiori next to the Tiber River. These, what you could describe as ever so slightly more secluded areas are exceptionally cooler than the nearby streets as much less sunlight reaches them from over the tops of the buildings in addition to the wonderful breeze that easily makes its way through the streets. In this article, the architectural design, use of space, and the technology used before the invention of air conditioning will be analyzed based on their capabilities and effectiveness in cooling down the city of Rome.

San Clemente is a basilica that is one of the best examples of how well basements keep cool. The top floor of the building itself is obviously warm but because the church was built on top of previous churches the lower rooms of the basilica stay extremely cool regardless of the temperature outside. In addition to this, at the bottom level of the basilica, the air is cold and slightly humid which might be due to the water that flows through various parts of the passageways.

Not only are courtyards pleasing to the eye, but they also are excellent at helping combat hot conditions. Though Villa d’Este is an extremely large villa, it proves just how effective significant greenery and well-designed buildings are. The use of green spaces is essential as shaded surfaces can be anywhere from 11-25 °C cooler than the surrounding unshaded surfaces, and, “Evapotranspiration, alone or in combination with shading, can help reduce peak summer temperatures by 2–9°F (1–5°C)” according to the United States Environmental Protection Agency. This was evident when I visited Villa d’Este as it was extremely hot in the sun but I was significantly cooler when next to any of the many sources of water and under the tall trees and shrubs provided shade. As I got closer or came across a fountain that had a large source of flowing water the air felt much cooler versus the ponds which had still water or the more open areas of the garden.

Figure 1: Image of a very large fountain overlooking ponds at the bottom of the garden 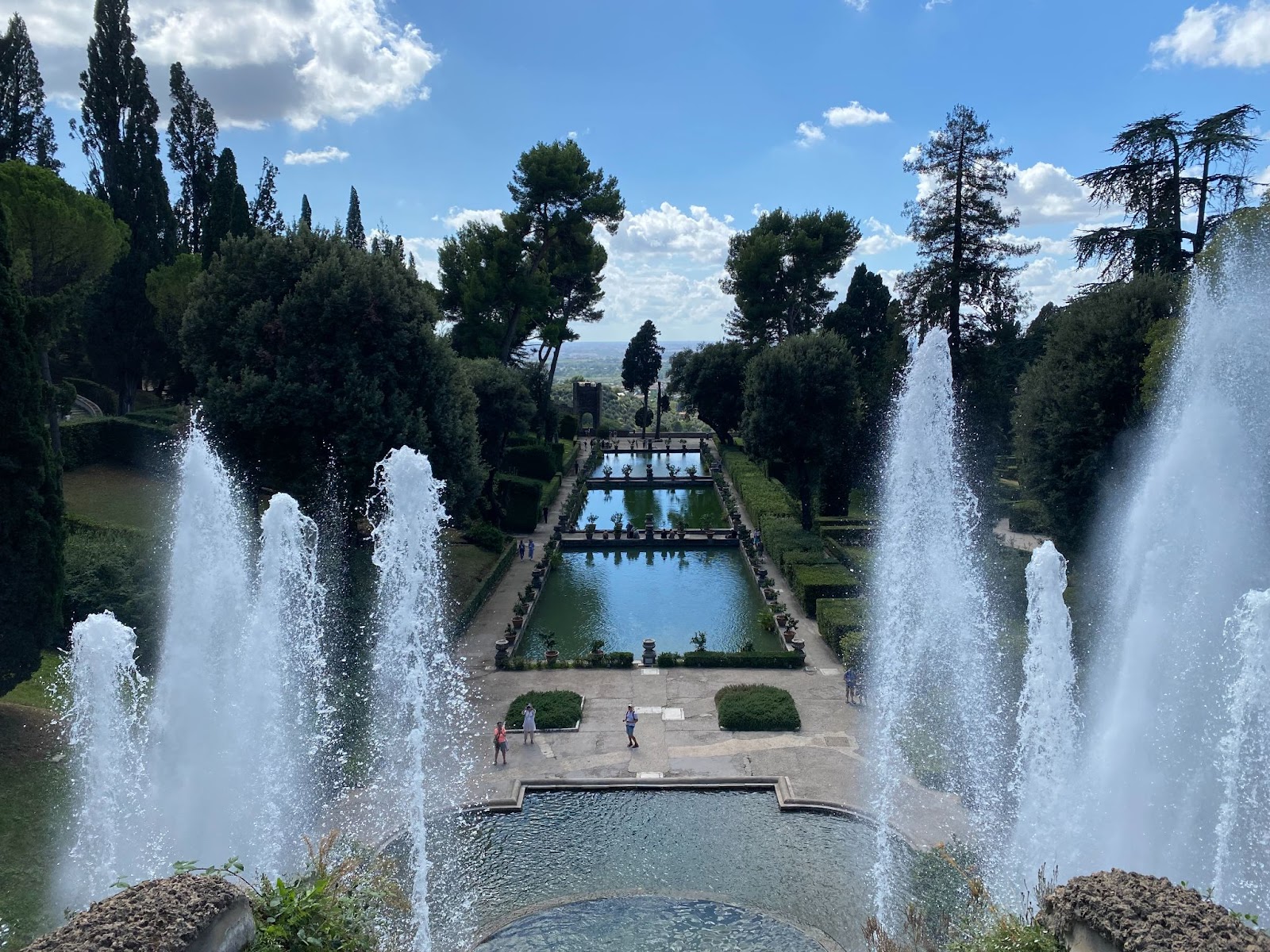 Figure 2 (left) and Figure 3 (right): Narrow pathways lined with bushes leading to fountains toward the bottom of Villa d’Este 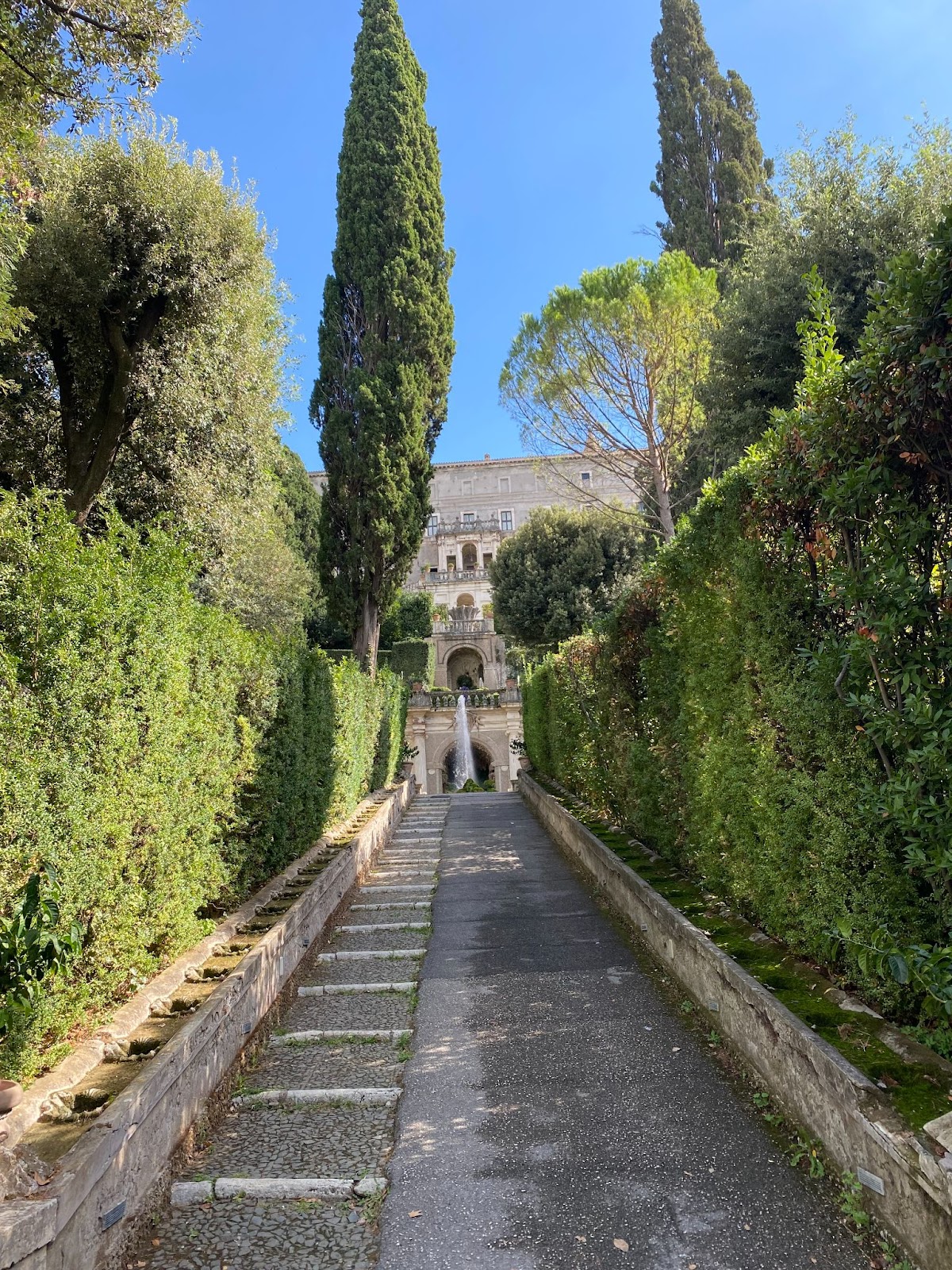 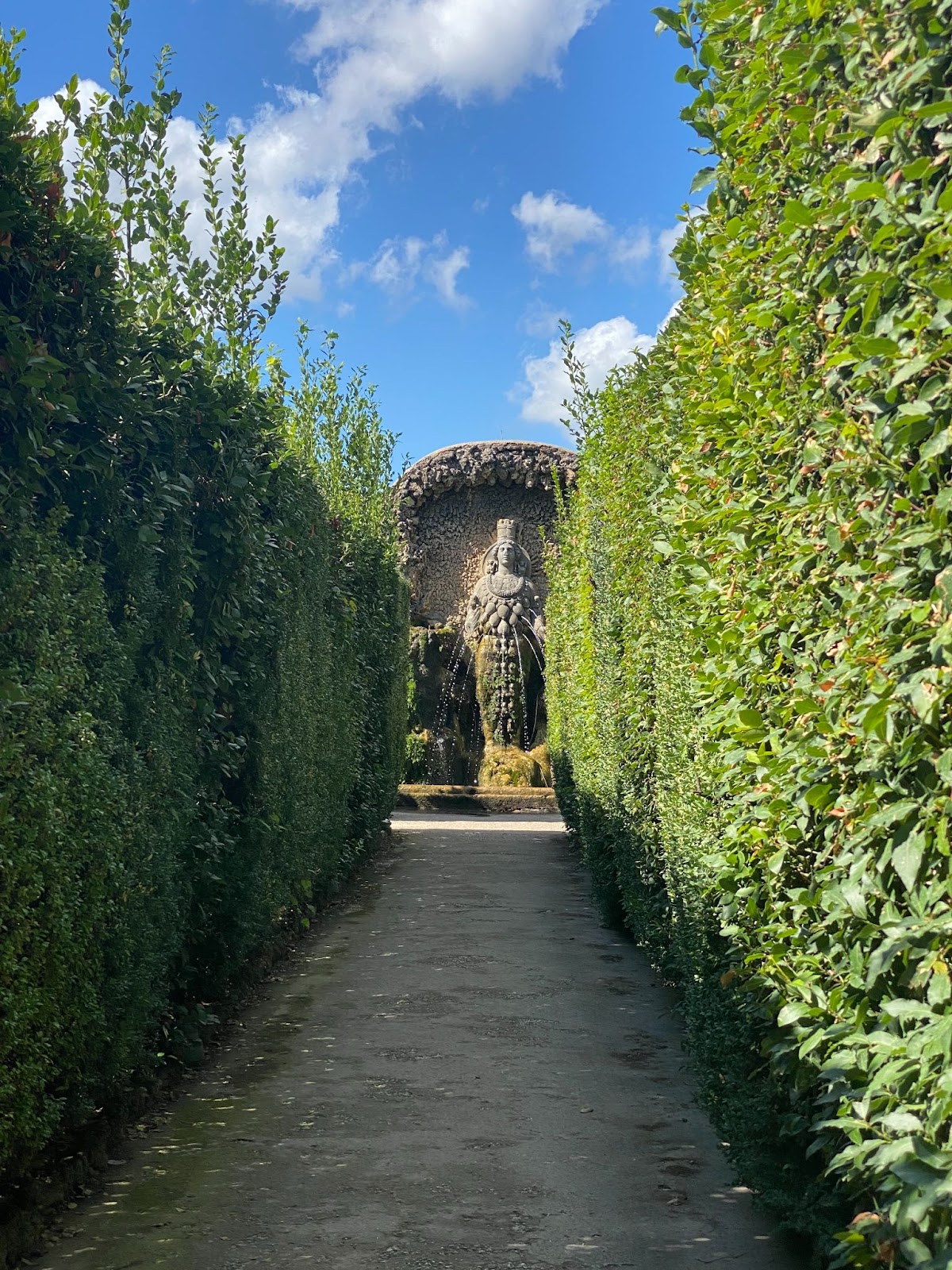 An interesting thing to note is that ancient Roman architects took wall thickness into consideration depending on what type of building they were designing. This is an important concept to understand since stone acts as a phenomenal insulator and prevents heat from penetrating the stone for long periods of time keeping the inside cooler. You can see an example of this concept being utilized in the construction of the Colosseum. The thickness of the walls of the Colosseum can be seen in Figure. # below. Since the walls are so thick and there is so much space within the walls on the bottom floor, the inside of the Colosseum after entering is considerably cooler than outside the walls.

Figure 4: Image of the outside walls of the Colosseum

A portico (meaning “porch”), is a covered entrance to a structure supported by evenly spaced columns and is a prime example of a building designed to keep the covered area cool as one of the purposes of a portico is to transition from an indoor to an outdoor space. While there is still a ceiling for cover, the openness between the pillars allows air to easily flow into the shaded area.

Figure 5: Image of an example of a Portico in Villa d’Este

One last method used to cool down spaces was developed from the cold and constant flow of water from the aqueducts. Cold water from the springs was sent down aqueducts and into lead or ceramic (terracotta) pipes which were built into certain parts of the inner section of walls. The cold water constantly traveled through the brickwork and combated the heating outside surface, decreasing the total amount of heat inside the home.

In order to cool spaces down, such as the busy streets, Romans utilized architecture, water, and gardens or greenery. One of the easiest methods that was used to cool down the streets was designing tall buildings and narrow streets. This prevented a large amount of sunlight from hitting the roads which were often made of black volcanic tuff which easily collects heat. While this may not have been the intent of the architects who designed the buildings and streets, this style of architecture seems to be effective at keeping the sunlight off the streets (during some parts of the day). Examples of such designs are show in figures 6, 7, and 8 below. In addition to this, I have seen this style of architecture used in other hot cities such as many in the south of Spain, with the intent of providing shade. 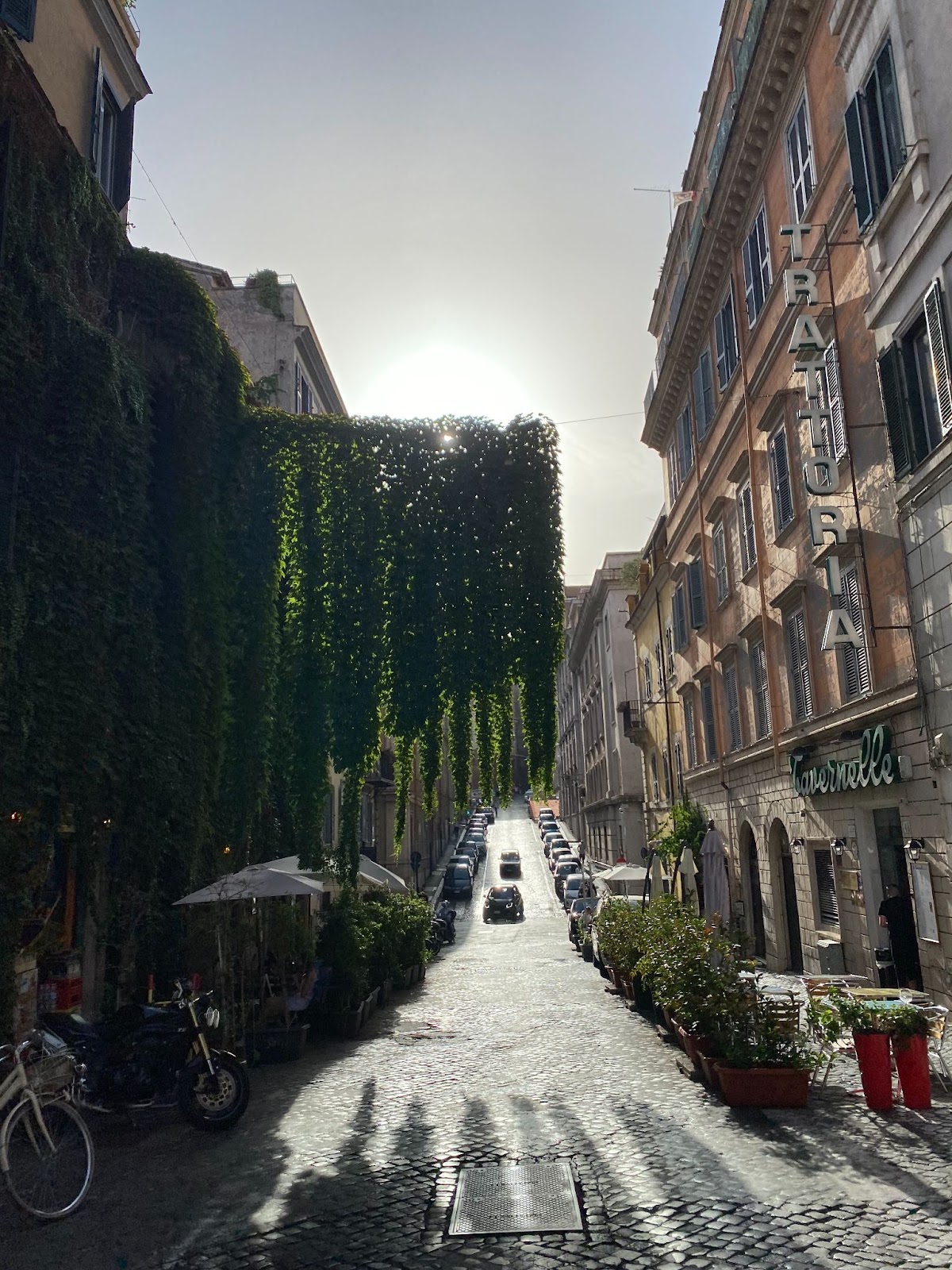 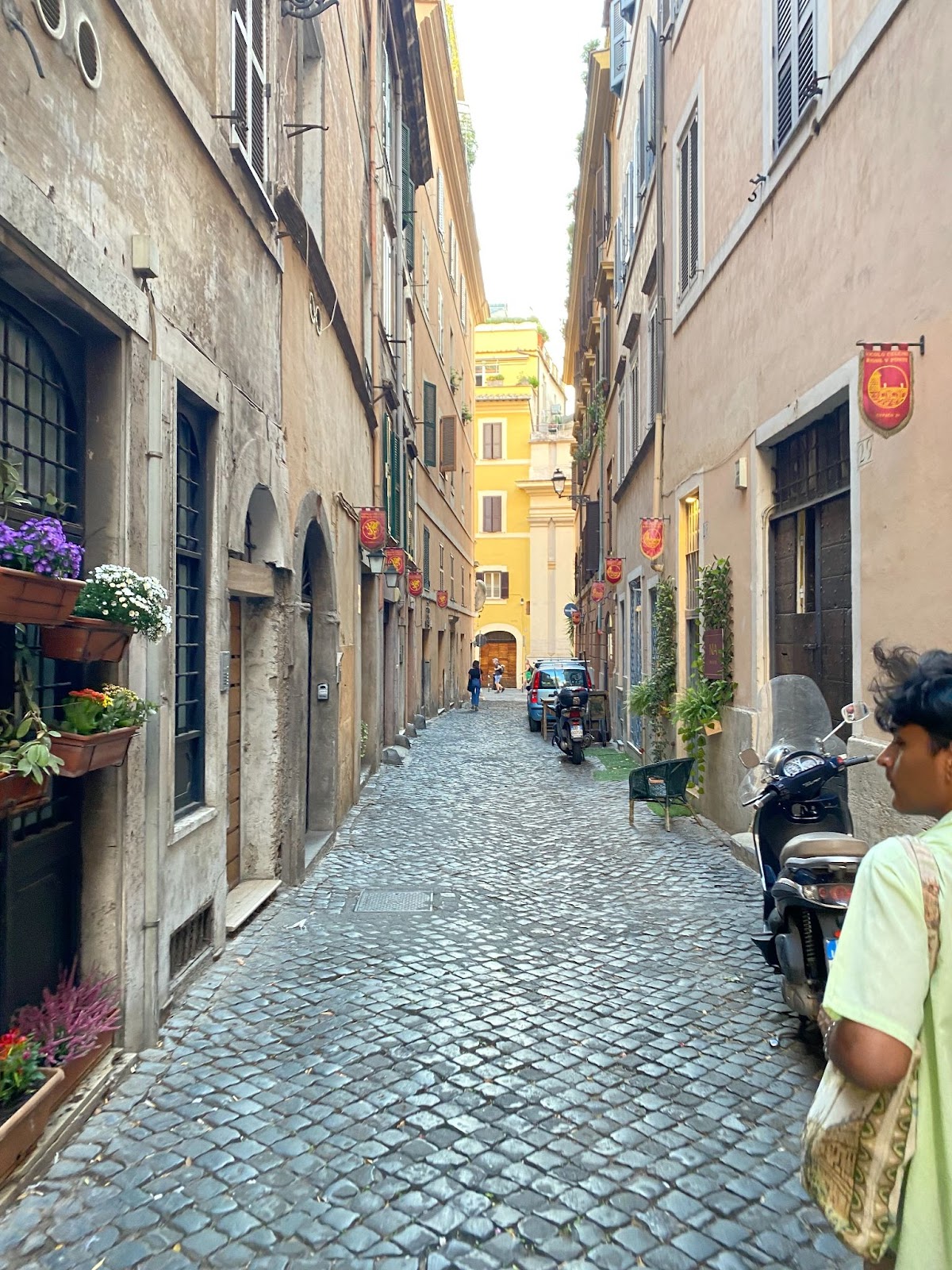 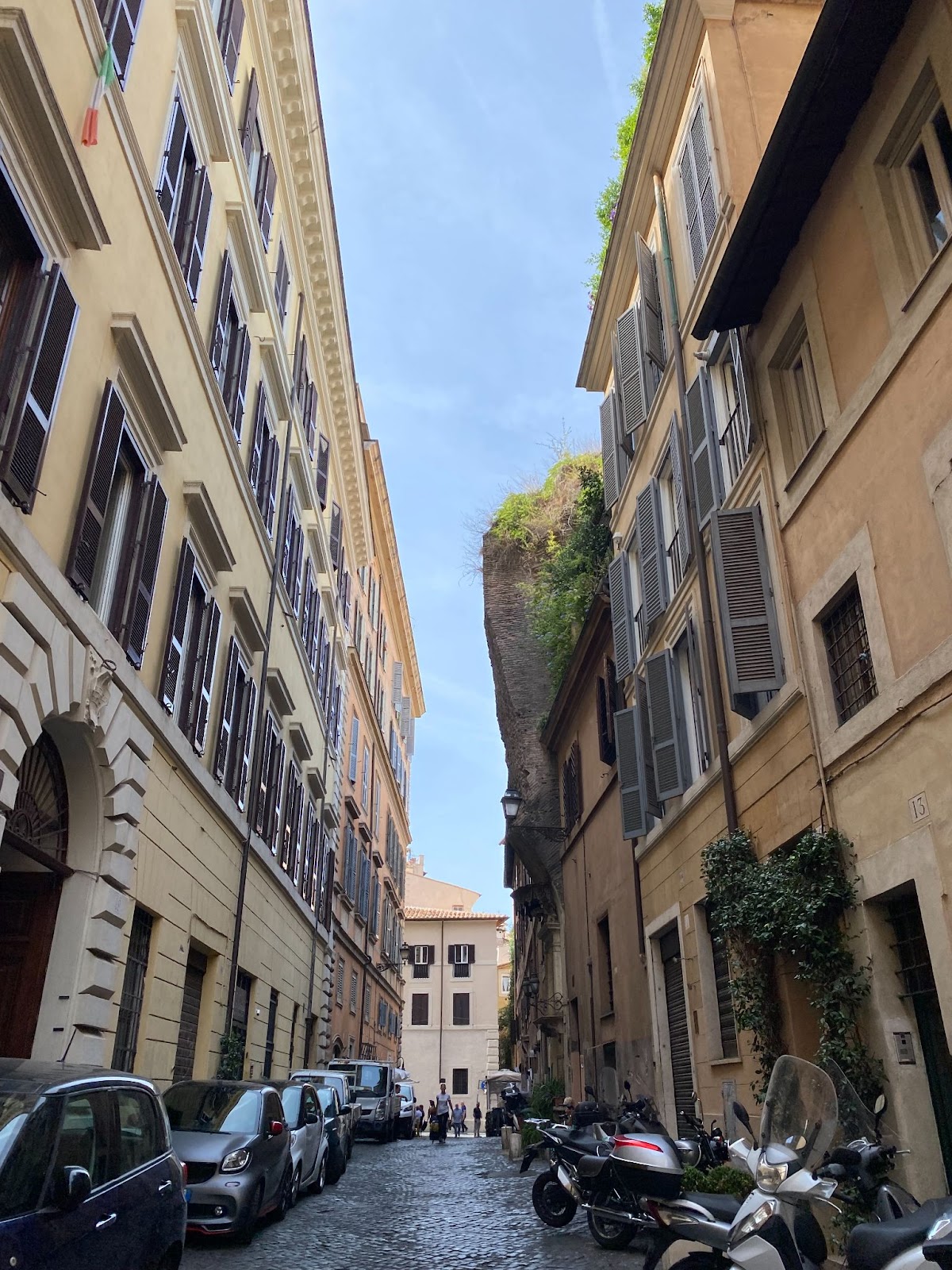 The use of open spaces within the design of homes and villas in conjunction with gardens or green spaces proved to be an extremely effective method of cooling down both small and large spaces. Villas in themself are a perfect example of the excellent use of architecture with the purpose of cooling down larger spaces as well with long lines of both covered and open walkways that control airflow and links with gardens planted with tall trees, bushes, or shrubs that provide shade. Early architects, such as Vitruvius who wrote De architectura, were aware of the effectiveness of using open space and greenery. This can be seen as ancient Rome has a large percentage of villas containing gardens and public green spaces in general. Below is a map of Horti Liciania, some of the major public gardens present in ancient Rome.

Finally, luxurious fountains are great at cooling the surrounding air temperature whether it be in a villa or in a public space. Due to the high amounts of moving water, fountains cause the water to evaporate and cool off the surrounding air by up to 3 °C providing a significant difference in temperature up to 35 meters away (Climate ADAPT). Figures 10 and 11 below are great examples of effective fountains.

Figure 10: Image of a fountain in Piazzi Navona

Figure 11: Image of the Trevi Fountain 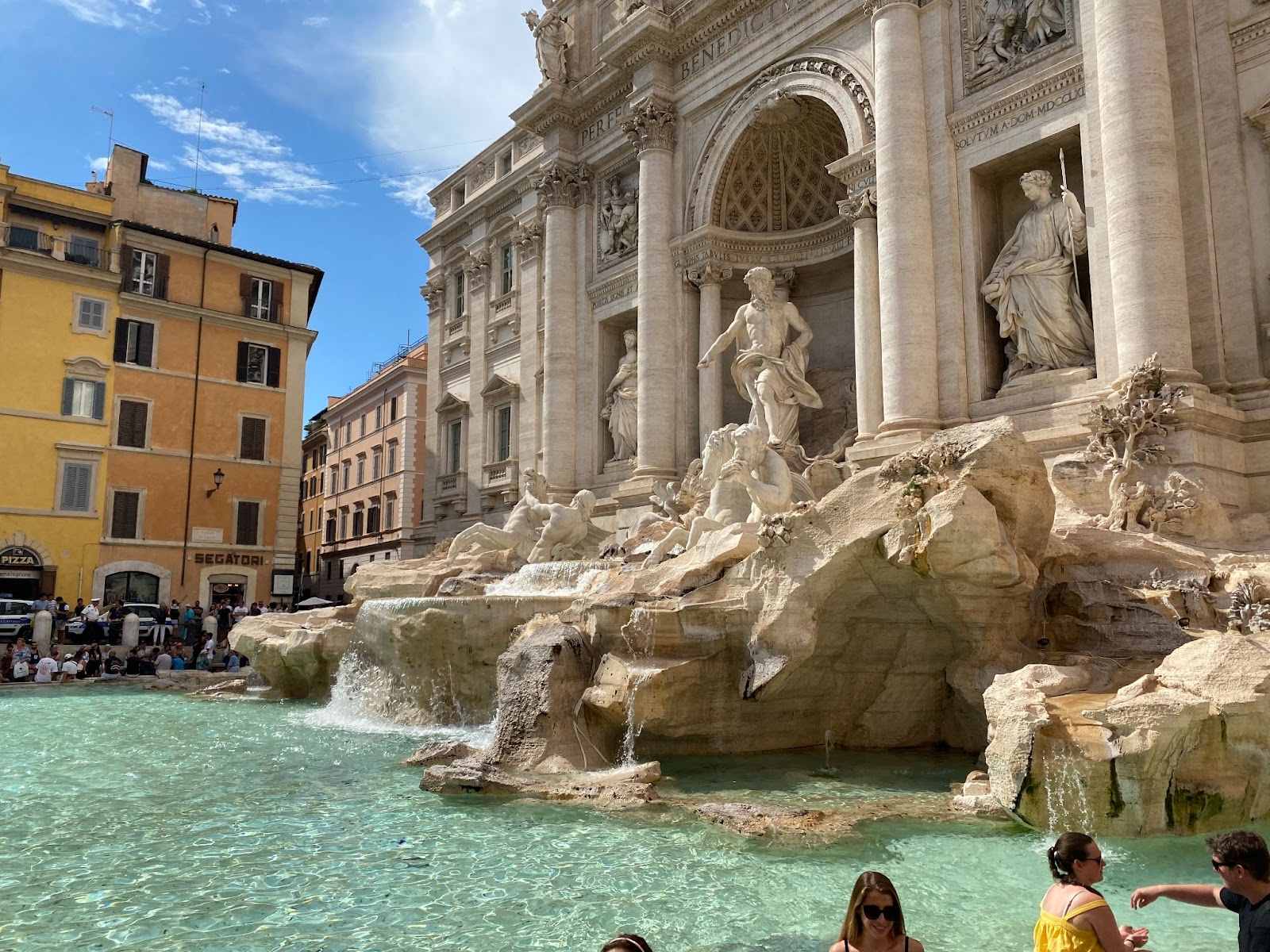 III. Comparison of reasons for rising air temperature between ancient and modern Rome

A critical note must be made on the difference in emission production between modern Rome and Rome in the past along with the causes of such and its relation to the air temperature. Within modern Rome, there are much more pollutants, emissions, and people than in Rome’s history due to the advances in technology and harsher forms of energy production that are used and though it may seem that modern Rome would be hotter due to these factors, the contrary is true. Lauren Lipuma, a writer, along with the American Geophysical Union, in an article on Phys.org, gives an excellent explanation for this, “the pollution by the Romans is five to 10 times less than that due to the recent use of gasoline but it took place for a long period of time – several centuries instead of 30 years of leaded gasoline use.” Air pollution typically contributes to a rise in temperature because these pollutants are often greenhouse gases, such as carbon dioxide, methane, and nitrous oxide which trap heat from the light of the sun and prevent heat from escaping the atmosphere (reference maybe). Though it is fair to assume that the main pollutants from the ancient Romans did not necessarily have a strong negative impact on the air quality more so that the production of toxic metals such as lead was detrimental to the immediate health of the people and the nearby environment excluding the air. Therefore, a reasonable assumption as to why the city’s core of ancient Rome was slightly hotter than that of modern Rome could be due to the urban heat island effect (UHI), a phenomenon where urban areas are considerably warmer than their rural surroundings (B-Open). B-Open, an Italian SME that specializes in software development for Earth Observation quotes the US Environmental Protection Agency stating, “the annual mean air temperature of a city with 1 million people or more can be 1–3°C warmer than its surroundings. In the evening, the difference can be as high as 12°C”. During its time, ancient Rome was one of the largest cities in the world with a very high density of people. The UHI effect most likely contributed to the heart within Rome’s center as the roads are primarily made out of black volcanic ash that easily absorbs heat, and could produce even more heat through the malfunction of cooling processes such as sources of water that may retain heat and push hot water out or the lack of airflow through streets trapping heat. This is shown below in Figure 12.

According to Giulia Margaritelli, a geoscientist with certifications from the Research Institute for Hydrogeological Protection in Italy, ancient Rome was, in fact, hotter by 2 °C than average temperatures in the later centuries of Rome. I believe that the methods discussed in this analysis are effective at reducing the temperature within Rome, specifically insulation through thicker walls and buildings which provide large amounts of shade. Though, through personal experience, I believe the following methods listed are the most effective methods of cooling down the temperature of modern Rome:

Supposing that Rome had been able to effectively cool itself down in the past without the use of AC which requires large amounts of electricity, a greater reliance on these smart designs in an urban form could prove to be extremely beneficial to the reduction of Rome’s temperature.

“Hot cities: an analysis of the Urban Heat Island of Rome using MODIS data and Google

“The Project Gutenberg Ebook of Ten Books on Architecture,” (2006). 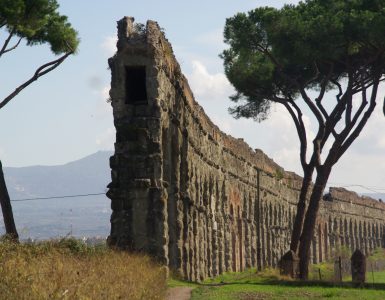 By Cameron Stuart *All photos produced by the author unless otherwise stated Introduction Visiting Rome allows one to see countless breathtaking creations of the ancient world. From the Colosseum to the Pantheon, people...

By Josie Noone, 2022 I. Introduction The Pantheon is one of many ancient marvels of Rome. The current and final Pantheon that we see today is its third reconstruction, completed in 125 A.D. by Emperor Hadrian during his...

I think I would want to check out sustainability in Rome, OR structures in Rome